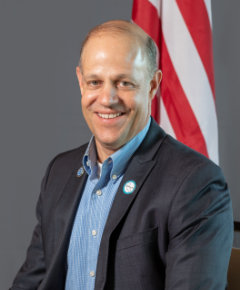 David “Dave” Pedersen is the General Manager of Las Virgenes Municipal Water District in the City of Calabasas.

He brings more than 27 years of public service experience focusing on water management, flood control and other public infrastructure.

He began his career with Los Angeles County Public Works, subsequently moving to the Irvine Ranch Water District where he was director of water operations and later executive director of operations.

He stays active in the water community, serving as the President Elect of WateReuse California and on the boards of the Association of California Water Agencies, Southern California Water Coalition and Urban Water Institute.

Dave has represented special districts on the CalMutuals JPRIMA Board of Directors since 2019.